Pesticide-Free Towns Movement is in Turkey 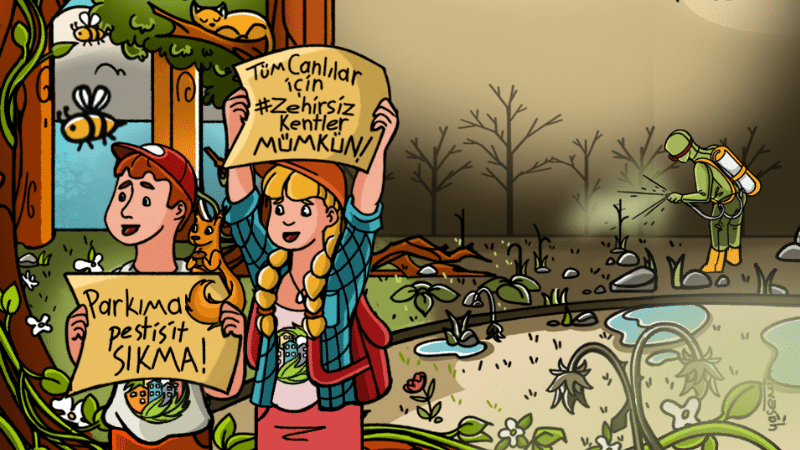 Pesticides and biocidal products used in our habitats remain in the soil and water where applied  continuing their toxic effect for long periods of time. Many towns around the world have proven that it is possible to become pesticide-free by using ecological and environment-friendly alternatives. Local authorities in Turkey still have a long way to go on this issue.

Buğday Association for Supporting Ecolocigal Living, in partnership with Pesticide Action Network Europe and in cooperation with No Pesticides on My Plate Network, is carrying out ‘‘Pesticide Free Towns Turkey’’ Project, which aims to raise awareness about harmful effects of pesticides and biocidal products used by local administrations and encourage alternative methods. The Project is supported by European Union Civil Society Dialogue VI Program and ‘‘Take Action for Pesticide-Free Towns’’ petition launched by the No Pesticides on My Plate Network within the scope of the project demands that municipalities pledge to take solid steps towards becoming a pesticide-free town.

A complete ban on these extremely harmful substances does not seem to be on the decision makers’ agenda although a complete ban seems to be the first possible solution. But there is another way: many municipalities, regions or countries around the world have been taking crucial steps to protect their citizens. Some of these actually manage to succeed in a complete pesticide ban.

Some local authorities in Turkey are developing pilot projects and applications, making strategic plans, research studies or beginning to discuss pesticide-free management in their agenda recently; however, there is still a long way to go, according to the ‘‘Municipal Pest Management in Turkey Situation Analysis Report’’. (1) 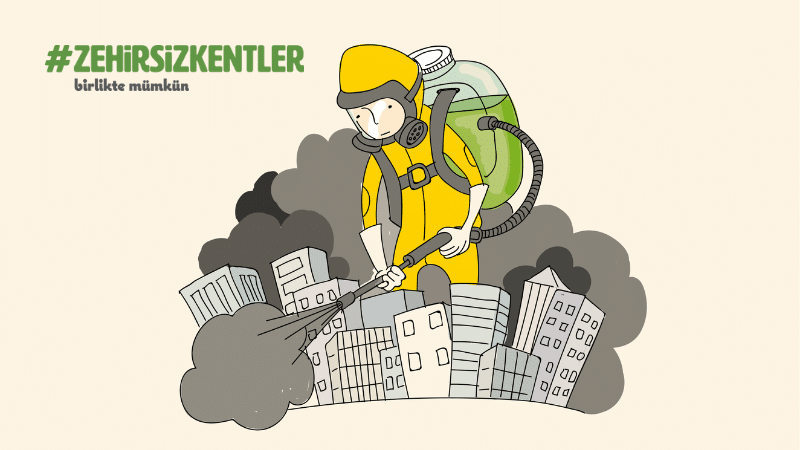 Pesticide Bans in Europe: a Brief History and Current Trends

Many cities and towns around the world have already shown that it is possible to become pesticide-free by using ecological and environment-friendly alternative methods. Many pioneer politicians, local authorities and NGOs have been planning to quit using toxic pesticides. For example, Wallonia Region of Belgium not only banned pesticide use, but also started a variety of projects supporting organic agriculture and encouraging organic farmers.

Danish towns took action to ban pesticide use in or near water bodies and some Italian communities (Vallersa and Malles) took similar steps in residential areas. (2) Efforts in becoming pesticide-free in France eventually became the ‘‘Labbe Law’’ in 2017, which banned local authorities, public institutions and the government from using pesticides in green spaces such as parks and gardens. The Law was expanded to cover private gardens in 2019, and will be further expanded to cover cemeteries, sports fields, camping areas and other private spaces, in 2022. Some large municipalities in the Netherlands have been voluntarily reducing pesticide use in public areas since the 1970s. As of 2017, applying pesticides on impermeable surfaces such as sidewalks and streets is also banned.

A non-commercial public health organisation called San Gabriel Valley Mosquito and Vector Control District was established to manage Saint Louise Encephalitis (SLE) transmitted by common mosquitoes in the San Gabriel region in 1989. Its main purpose was to protect people in the region from mosquito-borne diseases. Mosquito breeding spots and stagnant waters were removed. Natural predators and biological larvicides were put to use. ULV applications (chemical spraying) became only necessary when an outbreak happened. (3)

Pesticide-free municipalities’ experiences show that ongoing expenses became lower after an initial investment above the budget. Costs of alternative methods have been the same as and sometimes even lower than the pesticides costs.

In the United Kingdom, the first town to ban glyphosate and adopt non-chemical weed management after a local campaign led by the residents  in June 2015 was Glastonbury. They invested in foamstream technology, which costs much cheaper than glyphosate application, if the cost of the initial investment is neglected. (4)

Pesticides seem to be the cheapest solution in the short-term, but their long-term effects on health and the environment are usually not considered. External costs of pesticide use in the United Kingdom and Germany were found to be 257 million USD and 166 million USD, respectively. The burden of these costs falls on people with health issues arising from  pesticides, on nature, and on the citizens. (5)

Steps are taken towards becoming pesticide-free in Turkey

The Ministry of Agriculture and Forestry banned more than 200 pesticide active ingredients during the EU harmonization process because of their genotoxic, neurotoxic, carcinogenic, reproductive system toxicity and endocrine disrupting properties; groundwater pollution risks and their harmful effects on bees, fish and mammalians. 25 more pesticide active ingredients were added to the list of banned substances in 2020 and 2 more in 2021. However, glyphosate, classified as ‘‘possible carcinogenic’’ by the World Health Organization (WHO), is still registered for use in our country and used by some municipalities. These chemicals remain in closed spaces, soil and water, continuing their harmful effects even after use.

Pesticides are still commonly used for mosquito management in Turkey despite being an ineffective control method as well as having harmful effects on non-target organisms and areas. Especially in summer months, toxic ULV spray applications by mobile vehicles affect children’s health more than mosquitoes. Instead, it is possible to control mosquitoes by reducing breeding sources and/or biological larvicide applications.

Some municipalities in our country have started to take steps towards a healthy future. Kadıköy Municipality in İstanbul has been using alternative pest management methods in public areas for more than ten years. Reducing breeding sources, using larvae eating fish in large constructed wetlands, surface tension agents and species-specific bacterial toxins, as well as awareness raising activities such as preparing brochures, social media reach and face-to-face trainings are being carried out.

İstanbul Metropolitan Municipality, in line with the project developed in cooperation with universities, places ovitraps (traps for invasive mosquito species to lay eggs) in areas where Aedes is detected by the field staff based on citizens’ notifications via mobile and web-based applications developed to manage invasive mosquitoes such as Aedes albopictus. Physical and cultural control methods are also being used in these areas. Eggs in ovitraps are counted to assess the efficacy of managament methods. In situations where cultural and physical control do not perform well, a hundred percent biological, alternative method utilizing Bacillus thuringiensis israelensis (BTI) bacterium, affecting only target mosquito larvae is preferred. (6)

Pesticide-Free Towns Campaign launched by No Pesticides on My Plate Platform demands municipalities to completely stop using herbicides by 2025, 50% reduction in all other pesticides and biocidal products by 2030 and completely ban all of these products by 2040, by signing the pledge and creating a participatory strategic action plan on this matter.

Members and supporters of the Campaign are preparing for extensive campaigning, lobbying and advocacy activities in order to disseminate these demands across the entire network of local authorities, especially Ankara, İstanbul and İzmir metropolitan municipalities.

Along with municipalities, the Platform also encourages citizens to take action towards and participate in pesticide-free towns movement. The citizens are defending their right to live in a healthy environment by signing a petition and demanding municipalities to take solid steps ‘towards “Pesticide-Free Towns’’.

Municipalities need a participatory strategic action plan involving all relevant parties, prioritizing vulnerable groups and areas, including a phase-out period in order to expand nature-friendly steps and build pesticide-free towns. When led and facilitated by municipalities, involving citizens, private sector, farmers and mukhtars, and recognizing that the right to health and the right to living in a healthy environment should be kept above politics, we believe that pesticide-free towns are possible.

NO PESTICIDES ON MY PLATE PLATFORM