No Pesticides on My Plate Platform

No Pesticides on My Plate Civil Society Network

Buğday Association for Supporting Ecological Living and Pesticide Action Network Europe (PAN Europe) started the joint ‘‘No Pesticides on My Plate’’ project supported by EU Civil Society Dialogue V Programme on 1 April 2019. With this one year-long project, Buğday Association intended to raise awareness on harmful effects of pesticides and alternative pes management methods both for farmers and for consumers. In order to achieve these goals, Buğday Association led the process for establishing the No Pesticides on My Plate Civil Society Network (NPoMP CSN), built a website (www.zehirsizsofralar.org) with a variety of informative materials and carried out a comprehensive campaign together with NPoMP CSN.

No Pesticides on My Plate can be achieved together

These meetings’ main concerns were defining the network’s structure, functioning and scope; identifying short-, middle- and long-term objectives; and setting up an Executive Committee. Stakeholder responsibilities were defined and opinions were exchanged regarding the NPoMP project.

Thus, No Pesticides on My Plate Civil Society Network was established in September 2019, aiming to be a lasting initiative.

Network members convened for the NPoMP workshop at İstanbul Naval Museum on 22 November 2019 for workshops and capacity-building events about communication, campaigning and lobbying activities.

No Pesticides on My Plate Campaign

No Pesticides on My Plate Campaign began on 23 November 2019 with a press meeting held during the No Pesticides on My Plate Conference. The campaign demanded a priority and immediate ban for 13 active ingredients commonly used in agriculture (difenacoum, ethoprophos, cyfluthrin, beta-cyfluthrin, zeta-cypermethrin, fenamiphos, formetanate X formetanate hydrochloride, methiocarb, methomyl, tefluthrin, zinc phosphide, glyphosate, malathion), which are classified by World Health Organization as ‘‘extremely hazardous’’, ‘‘highly hazardous’’ and ‘‘possible carcinogenic’’; a ban for all pesticides until 2030; solid steps by the Ministry of Agriculture and Forestry for moving towards pesticide-free food production methods; support for small-scale and subsistence farmers who already use these methods; national policies encouraging farmers to use environment friendly, pesticide-free practices; increased monitoring and control for pesticides used in agriculture in Turkey and creating transparency for the results of such monitoring and control activities.

The campaign was supported by over 160.000 signatures and covered by 500 different news media organizations.

No Pesticides on My Plate Pesticide Action Network

NPoMP CSN met again on 28 February 2020 to evaluate the campaign and discuss the Network’s future actions. The members decided to transform the network into the No Pesticides on My Plate Platform in 2020 and continue its work in the platform’s framework as No Pesticides on My Plate Pesticide Action Network. Furthermore, the members decided to form new networks for heirloom seeds, food communities and similar other issues, as well as reforming and finalizing the platform’s internal regulations, bylaws, etc.

No Pesticides on My Plate Platform

CSOs and civil initiatives wishing a sustained collaboration, convened in February 2020 in order to establish the NPoMP Platform which focuses on food security with a wider scope.

NPoMP Platform’s objective was set as: ‘‘to ensure that a perspective that will favour public welfare and the right to life for all living beings and future generations; that will protect the ecosystem; that is long-term and needs-focused considering climate change; that prioritizes locality and self-sufficiency; that doesn’t ignore ancient knowledge and practices; prevails in all activities for making the food on our table and non-food agricultural products safe, healthy, available and accessible.

The platform, which was established by 38 CSOs working in health, environment, ecological living, consumer rights, nature protection, agriculture, food and similar fields, also received support from 23 other CSOs and civil initiatives. Various other networks, such as Turkey Organics Network (TORA), No Pesticides on My Plate Pesticide Action Network (NPoMP PAN) are also functioning under the platforms umbrella. 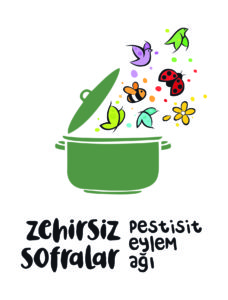